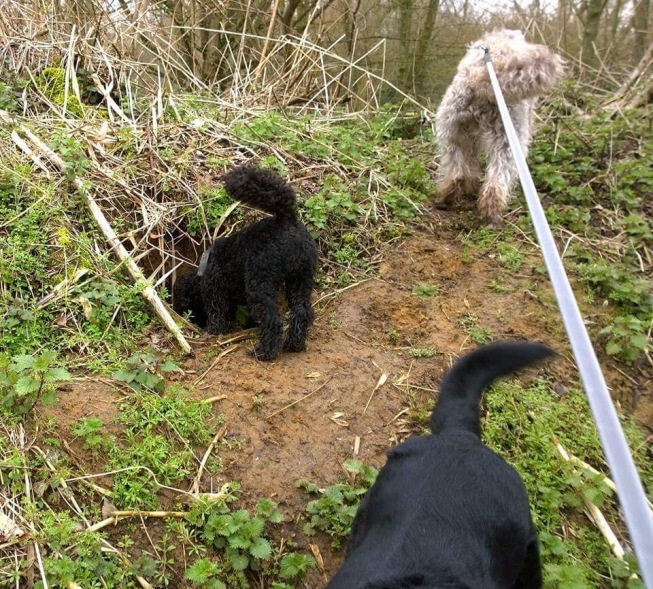 Does anyone remember learning languages in school, and learning about ‘false friends’? Words in a foreign language that look like a word in your native language but mean something different? Like in French, ‘bras’ is nothing to do with undergarments, but rather means ‘arm’. Well, it’s not quite the same thing, but in canine body language there are a number of signs that humans often misread, or don’t read in context, and get wrong. Today, I want to look at some of these. 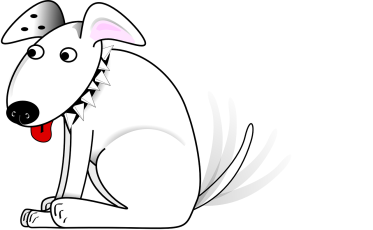 When trying to gauge how friendly a dog is, we humans have a tendency to read a wagging tail as a universal positive. However, like with most of the canine repertoire of body language, context is everything.

I’ve seen many dogs, who, when approached, will wag their tail, but also move away. People tend to have already clocked the wagging tail, and presume the dog is welcoming their advance, and determinedly continue with their greeting. The fact that the dog is simultaneously using signals of discomfort or avoidance (moving away) doesn’t register at all.

If a dog is wagging their tail, but at the same time moving away, the greater indicator of the dog’s feelings, is to me, very clearly, the moving away! In these cases, the dog is using the tail wag to indicate politeness, and a desire to avoid conflict, not a desire to be touched or approached. We use a smile similarly. Has anyone ever approached you on the street to try and sell you something or ask for money? Many of us will smile politely and try to move away. Our smile is not an attempt to engage a person, but rather to politely avoid engaging without provoking any hostility. Often dogs in these situations are on lead, and simply don’t have the option to escape the attention. This is a really unfair situation to put a dog in.

By way of another example, I visited a client a number of years ago, with a dog who was barking at all of her guests. As she ran a B&B, this was quite an issue. When I went to her house, her dog was lying in her bed, in the corner, wagging her tail. But her head was low, her eyes were wide, and she was growling and periodically barking. Again, this was not a happy wag. This was a frightened wag. The context for the tail wag was provided by all of the other communication that was happening. Needless to say, I made no attempt to approach this dog!

When you wish to approach a dog, don’t rely on their tail- your safest bet is always to give the dog the option to freely approach you. Look at their other body language. A friendly, relaxed dog will have a relaxed body. If the dog is leaning away, trying to move away, or looking away, abandon all attempts at engagement, and move away!

Wants a belly rub, right? Not necessarily… Rolling over is another calming signal (part of a dog’s repertoire, often used to diffuse tension and avoid conflict), and is often a sign of a really frightened dog, who wants nothing more than for the ‘threat’ (you!) to go away.

How to tell? Again, the amount of tension in the dog’s body can be a give-away. Look out for ‘whale-eye’, (when you can see the whites of the dog’s eyes), tension in the face, etc. These are indicators of fear.  A frightened dog can also be quite rigid whilst rolling over. Sometimes they will urinate. This sort of ‘submissive’ behaviour is the dog’s attempt to calm the threat down.

It can also be a self-calming technique. Some really interesting research done by my PDTE colleagues Aurelian and Cristina Budzinski in France on the dog’s pulse rate has shown that rolling on the ground reduces the dog’s pulse rate, in a similar way to a body shake. For those who’ve not come across this before, it’s been long observed that after a stressful encounter a dog will often ‘shake off’ the stress.

Of course, some dogs will roll over for a belly rub from a friend. If the dog willingly approaches you, and rolls over, and when you stop petting them, they paw your arm, that could well be a dog who wants a belly rub!

I had an interesting case a couple of years ago in London. I was told that the dog in question seemed really conflicted around other dogs. On the one had she seemed scared of other dogs- hung back, didn’t want to approach, and yet, once she got near them, got very playful.

When we went out with the dog, it became immediately clear what was happening.  Her state of mind wasn’t changing, her tactic was! You might be familiar with the 4 Fs and how we react to a threat: Flight, Fight, Freeze or Flirt/Fiddle about.

This dog, whilst the other dogs were far enough away for it to be an option, attempted the Flight option (moving away/keeping her distance). But once she was in close proximity, and no longer felt that this was an option, she switched tactic and tried Flirt/Fiddle about. What the owners were reading as the dog being playful, was actually just an extension of the dog’s attempt to avoid any sort of conflict with other dogs, and came from a place of fear.

Again, the key to reading this behaviour was to look at the context. If a dog is afraid of other dogs, it seems unlikely that this fear would suddenly evaporate as the object of the fear got closer! The context of your dog’s ‘normal’ behaviour is also relevant. If your dog usually greets strangers quite calmly, and then out of the blue acts very ‘silly’ when a stranger approaches them, this can be a warning sign that the dog is finding something about that person, the way they’re behaving, or the way they’re approaching, frightening.

Our job as our dogs’ guardians is to protect them. The best thing you can do if your dog is exhibiting any of these behaviours, and your suspicion is that they are feeling scared, is to remove them from the situation, or give them the choice as to whether to engage or not.

My new book ‘Office Dogs; The Manual’ is now available to pre-order on Amazon. Find it here!